Before we even bought our new home, I started filing away images of ideas for window treatments.  They offered to put blinds throughout the whole house for us (at an additional cost of course) but we declined because I knew I wanted something different, at least in a few of the rooms.  There are some rooms where blinds just make the most sense so we did install them ourselves in those rooms, but I wanted to do something different in the family room. Our old house had larger windows with pretty crown molding.  That was one of my favorite things about that house.  So when I walked into this house with basic, average sized, windows (even though they are great) felt a little squatty. 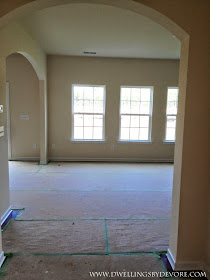 (before we moved in)

So to fix that problem, I went on the hunt for some roman shades that would be slightly wider than the window and a little longer too.  I ended up going with these from Home Depot.  I needed them to be roughly 48" by 72" and I just couldn't find any that size in our local stores.  I had a little trouble finding that size online too, so I was happy to come across these.  I really like the color.  It's not too yellowish or too brown.  The color is called driftwood and it's pretty much the same color as driftwood.  Appropriately named I guess. :)  They actually match my dining room light perfectly.

I snapped a pic of the sample they had in the store and it's a pretty accurate depiction of the color. 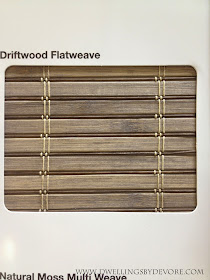 I hung them using the same method I mentioned here and it really made it much easier to hang them and get them all even.  I ended up hanging them about a foot higher than the window to give the illusion of a longer, taller window. 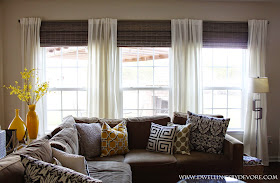 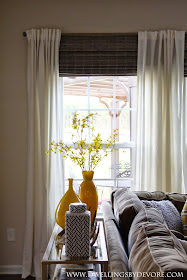 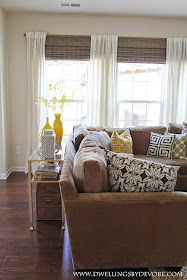 Don't judge my pictures too harshly, taking pictures of windows is quite the feat!  I've only noticed one negative so far with the shades.  They are a little see through.  I may end up adding a blackout lining if we feel like we need a little more privacy, but for now I'm loving them!