We've talked about getting a king size bed for the longest time.  We've had a queen size since we got married and I'm ready for a little more room.  My husband is a big guy, and although he'll deny it, he kind of likes to hog take over the bed. :)  We held off on buying anything until after our house sold because we definitely didn't want to have to move it up and down the stairs twice.  So now that we are getting settled in, we've started searching for something new.  I've always dreamed of having an upholstered bed so I knew that was the route we would go.  I thought about DIYing one.  I almost always go that route.  In fact, most of the furniture, if not all, in our home is DIYed, from Craigslist, or thrifted, but when it came down to it I realized it just wasn't worth the frustration and hastle.  At least not right now.  So I've been scouring the internet and local stores to try to find the best deal.  I found a few that were ok locally and a few that were great but not in the budget.  Ultimately I found the best deals online though.  We finally settled on one from Wayfair. (number 1 below)  I think it actually ended up being the cheapest of all of them.  I wanted something classic that I would easily tire because we plan to have this bed for a long time.  This one fit the bill and was neutral enough to work with pretty much anything, which is great because I still don't have a definite plan for what I'm doing in there.  They also offered free shipping, no tax, and a 10% off coupon if you signed up for their emails.  So it ended up being a great deal.  Here are a few of the other contenders in case you are in the market for one yourself. 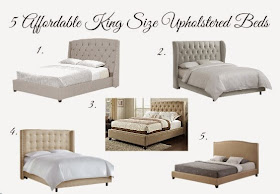