I love it when a plan comes together

Occasionally you have those aha! moments where you get an idea and it actually works.  This was one of those rare moments.  It all started with this little fan.  I bought it on clearance at Homegoods for $7.  The tag said  it was originally $69.99 but the base was missing, it was just the top part.  It's kind of odd, I wonder where the base went?  Anyways, that's besides the point.  I was drawn to the red clearance price tag (what is it about that red sticker that makes me feel like I need to buy it) and the fact that it was originally $69.99.  I just knew I could make it work and here we are over a year later and I finally figured it out, sometimes it takes me a while folks.
So, for now, just ignore the little bit of gold you see in this picture.  Just look at the black part, the fan part.  That's what I found for $7.  Nothing too fan-cy ;) 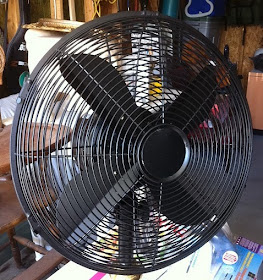 Now, here we are a year later and I found this table lamp combo at Goodwill for half price on the 4th of July.  (I know this story is so random) and I thought I could remove the top half and use it as an end table in my office.  Wrong!  I could get the top part off without breaking the glass.  I thought it was just money down the drain when I had my aha! moment. 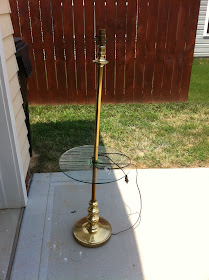 Why not use the bottom part of this table lamp combo for that fan. It was very heavy (which the base of the fan needed to be so it wouldn't fall over, especially when the fan was on) It was perfect. Who knows what made me think of the fan after all this time but I drug it out of the back of the garage and low and behold it fit, perfectly. I drug my husband outside to witness this amazing thing that had just occurred. He wasn't nearly as impressed as I was.  Now, the base just needed a little black spraypaint to make it all come together. 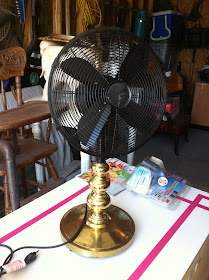 Don't you just love it when a plan comes together? 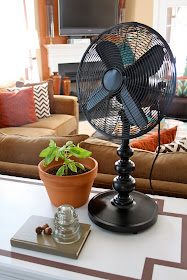